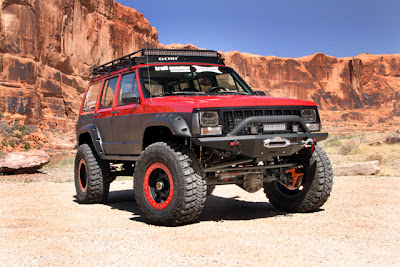 Jeep owners know that their vehicles are more than a means of transportation. That’s why older Jeeps like the XJ Cherokee, are as popular as some sixties muscle cars. The difference however, is that Jeep XJ owners aren’t afraid to get their vehicles dirty. That's why you often see them modified for extreme trail use. This is one of the reasons why Chris Faustmann, who manages the research and development for Performance Automotive Group, bought and built-up a 1996 Jeep Cherokee that would be used as both a test bed for the company's new product development, as well as a means to satisfy Faustmann’s love for rock crawling with his favorite model Jeep.

To begin with, the XJ was outfitted with the company’s OR-Fab line of products that include a new front winch mount HD bumper, and a new rear “comp cut” bumper. The new rear bumper was developed on this Jeep and is much more streamlined with a tapered edge, and designed to easily slip off rocks while protecting the rear hatch and quarters. The Jeep was also outfitted with OR-Fab’s rear quarter panels, as well as a set of custom fabricated rock rails to protect the XJ’s side rockers.

The front suspension system used on the Jeep, is a prototype that Faustmann designed for the company's other brand, Trail Master Suspension. It's a six-inch lift system that features a tri-link long-arm lift and a heavy duty cross member and track bar bracket. There's no telling when or if the new suspension will make it to market, but it appears to work extremely well on the XJ, when it debuted for it's first trail run during the Easter Jeep Safari in Moab, Utah. To compliment the front, the rear was outfitted with a Rock Krawler four-link coil conversion with RuffStuff chassis stiffeners. Furthermore, to allow the XJ to drive and maneuver smoothly, Faustmann also added a set of 11-inch Fox Racing 2.0 reservoir shocks, a Currie Anti-Rock sway bar system, and PSC hydraulic ram-assist steering .

The XJ’s drivetrain was totally upgraded to a variety of components that not too many Jeep owners tend to consider. The front axles for example, are out of a 1976 Ford F-150. It’s essentially a Dana 44 high-pinion housing that was outfitted with T&T Customs axle truss, an ARB air locker, Warn premium locking hubs, and Superior 30-spline Evolution axles with 5:13 ring and pinion gears.  The Ford front axle is connected to REID Racing forged steering knuckles and Artec Industries forged steering arms, which all match up great to the XJ’s body and chassis.

With a front drivetrain that’s much stronger than the factory XJ axles and steering, Faustmann also did the same with the rear by installing a Ford 9-inch out of a 1979 F-150 pickup. The housing was modified with an RK Heavy Duty welded truss system, 35-spline Superior Evolution axles and gears, a Detroit locker, and a rear disc brake conversion that was compiled from GM 3/4-ton truck parts and Ruff Stuff Specialties caliper brackets. The original transfer case was also upgraded with an Atlas two-speed unit and new heavy duty, 1310 steel driveshafts from Tom Woods Custom Driveshafts.


Under the hood, Faustmann added an ATK Performance 4.0 liter engine and outfitted it with an S&S Custom exhaust system.  The engine transfers its torque to a rebuilt Jeep AW4 automatic transmission, before it applies the power to the set of Goodyear 315/70R17 MT/R Kevlar tires mounted on Trail Ready 17x8.5 beadlock wheels.

Just in case the XJ ever gets into a precarious situation, the Warn M8000 winch, with Spyder Line synthetic cable running through a Hawse billet fairlead, provides an excellent means for recovery. Extra trail gear can be carried on the Gobi Stealth roof rack, and a set of Rigid Industries LED lights and light bar help to illuminate the way once the sun sets. The overall exterior of the XJ looks like it’s ready to take on any challenge, but the interior didn’t need to change much, with the only upgrade being a set of front black, Corbeau Baja XR-S seats.

Needless to say, this Jeep gets lots of looks when it’s both on the highway and the trail. But aside from the American Rock Rod hood lovers and the bright red paint, the XJ is impressive for its engineering savvy and use of non–traditional components. This has many Jeep owners crawling in and underneath the vehicle to check out how the Cherokee was constructed.

Considering that Jeep is now owned by Fiat, who also owns Ferarri, it gave Faustmann the idea to consider a whimsical nomenclature to the Cherokee. While Jeep did build a Ferrari styled version of the SRT8 Grand Cherokee, Faustmann new that his vehicle wasn’t truly Italian influenced, so it was dubbed the “Ferrarjeep.” More than anything, this Jeep Cherokee has stirred the imagination of many enthusiasts who have renewed their love for the Cherokee, and are now inspired to build and drive this vehicle on the trail once again.
For more information, contact Performance Automotive Group, P.O. Box 3450, Chino Valley, Arizona, 86323. (928) 636-7080. Visit them at www.OR-Fab.com and www.TrailMasterSuspension.com.


Posted by PerfAutoGroup@gmail.com at 11:49 AM

Promote Your Page Too